David B. Lindell and David Long 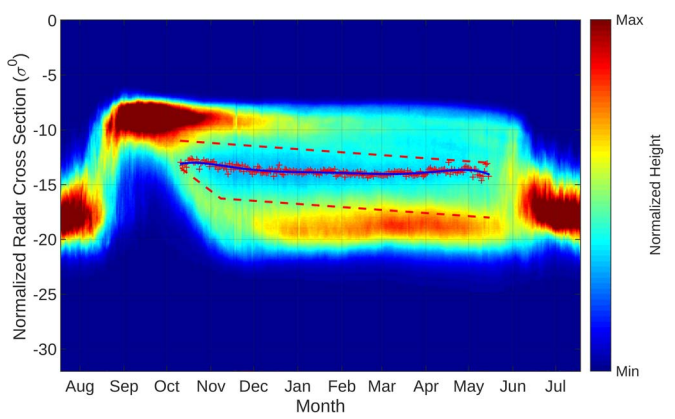 Arctic sea ice can be classified as first-year (FY) or multiyear (MY) based on data collected by satellite microwave scatterometers. The Oceansat-2 Ku-band Scatterometer (OSCAT) was operational from 2009 to 2014 and is here used to classify ice as FY or MY during these years. Due to similarities in backscatter measurements from sea ice and open water, a NASA Team ice concentration product derived from passive microwave brightness temperatures is used to restrict the classification area to within the sea ice extent. Classification of FY and MY ice is completed with OSCAT by applying a temporally adjusted threshold on backscatter values. The classification method is also applied to the Quick Scatterometer (QuikSCAT) data set, and ice age classifications are processed using QuikSCAT for 1999-2009. The combined QuikSCAT and OSCAT classifications represent a 15-year record, which extends from 1999 to 2014. The classifications show a decrease in MY ice, while the total area of the ice cover remains consistent throughout winter seasons over the time series.